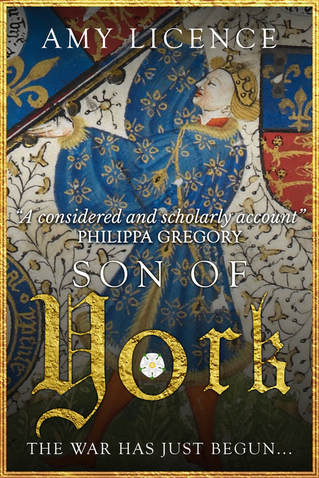 England, 1455. King Henry VI is proving to be an unstable monarch, prone to bouts of mysterious illness and susceptible to manipulation from others. Richard of York, the most powerful magnate in the land, steps in to manage affairs whilst Henry is unwell. Many people prefer York’s rule, which does not please the queen. The country begins to divide and plots start to hatch. York himself is directly descended from the royal family line, in fact, a little more directly than Henry but he puts this fact aside and strives only to serve the king. This, however, becomes increasingly difficult due to the acts of the queen, who, now feeling threatened by York, calls her men to get rid of him. The York family is strong and the two eldest sons, Edward and Edmund are approaching manhood. Edward, bold and eager, is keen to leave his childhood behind and enter the world of men, of politics, combat and love. Edmund, the younger brother is more introspective and struggles to project his public image. Both boys look to York as their mentor, a match for any king; and Richard is proud of them both. But with sons comes the question of inheritance. Who will succeed Henry’s throne? His own son, the young Prince Edward, or the capable York and his heirs? This historical window into the past lifts figures from the history books and gives the personality and purpose behind their actions. The story bears witness to the extremes of the human condition, from loving tenderness in court to vengeful violence on the battlefield.

​"A marvellous addition to the body of literature on the topic.... It is well written and insightful." Amazon review.

"Amy Licence has given us a new breed of historical fiction here. While the dialogue is her own, and the extra characters are fictional; the central figures and events, are real and beautifully depicted. The history is exquisitely taken into consideration, and the result is a story stunningly told." ​Amazon review.

​"Ms. Licence has written a real page turner which brings the young Edward IV to life in a superior and well-crafted novel. If more history was written in this manner, combining historical facts with a great narrative, readers would enjoy their history lessons more. The characters are perfectly described in their complex relationships, are well drawn and the descriptions of the battles are among the best I have ever read. Thus is such a good read, that I know I will enjoy this book a second time in the future." Amazon review.

"I love this book! If you like Philippa Gregory... you will love this book... I can't wait to read more of Amy's historical fiction. There
is definitely an audience for this. She is an excellent writer! You won't be disappointed."  Amazon review.

​"If you're a fan of Philippa Gregory's writing, then Son of York is definitely for you. Licence's prose is swift and cinematic - she paints clear pictures of scenes and characters that could very well lend themselves to the screen. Her writing is very present and has a good sense of flow... Licence's exploration of the relationship between Edward and his brother Edmund - younger by a year and growing up in Edward's shadow - really piqued my interest. Looming large in our cultural conscience are Edward's relationships with his other brothers - the ill-fated George, Duke of Clarence, and the infamous Richard III. Yet, Licence pays careful attention to another fraternal story, shading the contrasts between Edmund and Edward. She illustrates nicely how two young men of differing temperaments approach a politically precarious situation, and how varyingly they respond to questions of inheritance, leadership, and eventually armed conflict. Indeed, the novel very well could have been called Sons of York.
However, this is ultimately Edward's story, and as a study of a young man stepping into adulthood, and the royal role he was destined to play, Son of York is an enjoyable read that is tough to put down.​" Amazon review.
Powered by